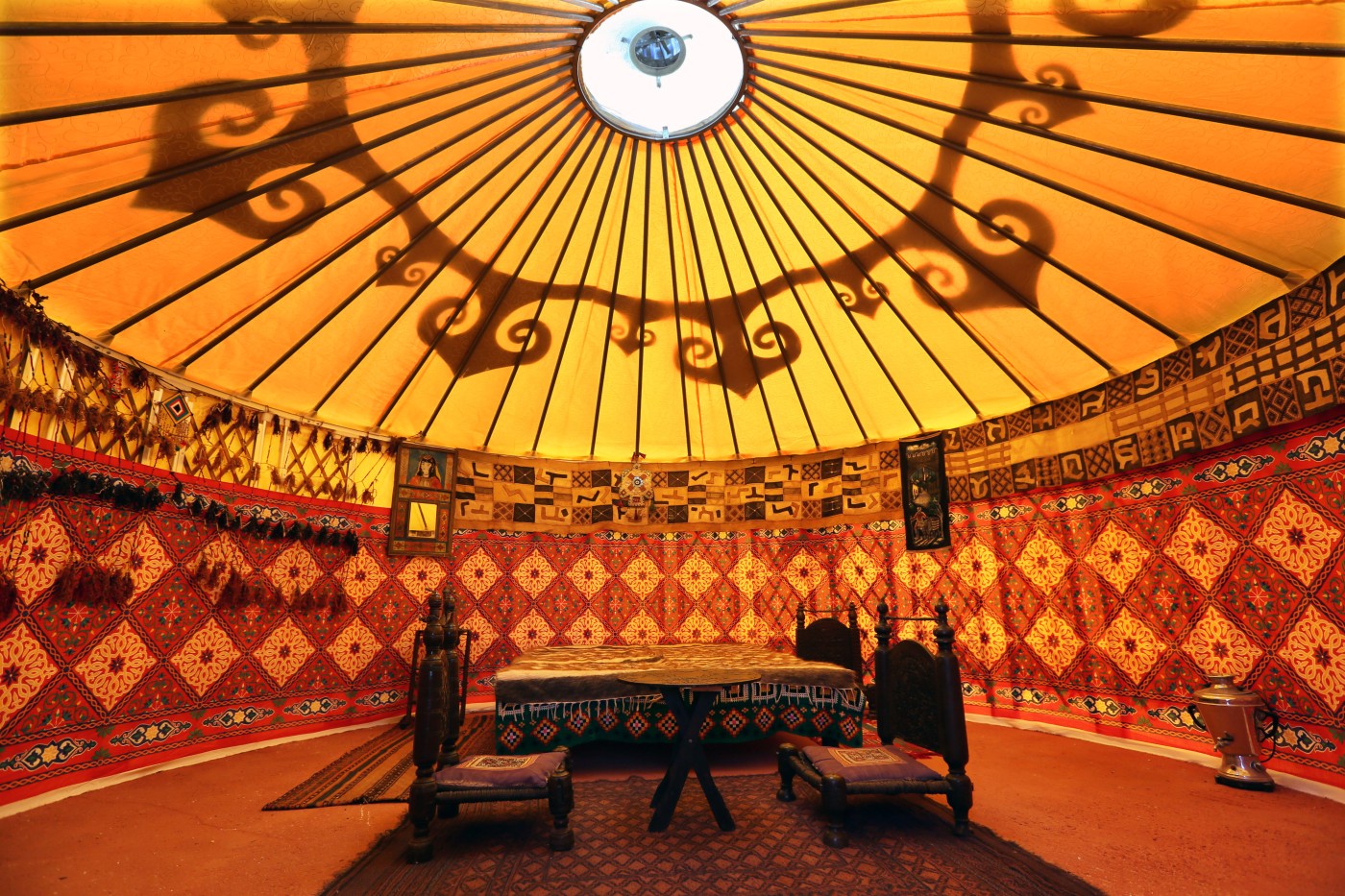 The yurt is a portable round tent used by the nomads of the Central Asian steppes, nowadays notably in Mongolia where it is called a ger. It consists of an assembly of wooden or bamboo structures with elaborately carved and painted doors, which are covered with felt or skin, leaving a round opening in the centre of the dome to allow for light and ventilation.

In 2013, the “traditional craftsmanship of the Mongol Ger and its associated customs” were recognized as a UNESCO Intangible Cultural Heritage.

The origin of the yurt, though, is somewhat disputed, as it is difficult to find hard archaeological evidence for a tent structure made from perishable materials. It is commonly stated that the first written description of a yurt was penned by the Greek historian Herodotus in the 5th century BC who describes in book IV of his Historia the tents of the Scythians, a nomadic Iranian people who roamed the Eurasian steppes on their sturdy horses. However, Herodotus actually only states that the Scythians live as nomads and travel with their dwellings on wagons.

Undisputed are descriptions of yurts by Medieval European travellers such as Giovanni da Pian del Carpine, an Italian priest sent to the Great Khan by Pope Innocent IV in the 13th century. He describes that…

“Their habitations are round and cunningly made with wickers and staves in manner of a tent. But in the centre of the top thereof, they have a window open to convey the light in and the smoke out. For their fire is alwayes in the middest. Their wall are covered with felt. Their doors are made of felt also. Some of these tents may quickly be taken asunder, and set together again, and are carried upon beasts backs. Others cannot be taken asunder, but are stowed upon carts. And wherever they go, be it either to war, or to any other place, they transport their tents with them. They are very rich of cattle, as in camels, oxen, sheep, and goats. And I think they have more horses and mares then all the rest of the world.”

One century later, Marco Polo states that the Mongols…

„…have circular houses made of wood and covered with felt, which they carry about with them on four-wheeled wagons wherever they go. For the framework of rods is so neatly and skillfully constructed that it is light to carry. And every time they unfold their house and set it up, the door is always facing south.”

So, are there any pre-Medieval traces of yurts? If we have neither written records nor archaeological traces of actual yurts, we should turn towards the study of depictions.

In 1982, in the ruins of Arjan in the Zagros Mountains of Iran, a Neo-Elamite tomb was excavated, containing, among other objects, a metal bowl dating to around 600 BC. The Arjan bowl, as it was named, seems to shows the wooden structure of a yurt with the front door flapped raised to create a shaded entrance. The depiction of the tent cover has been omitted in order to show the insides of the yurt.

Another early depiction of a yurt-like structure comes from the wall painting of a 1st century Sarmatian tomb in Panticapaeum on the Crimean peninsula. It shows a domestic scene in front of a round tent being approached by a horse rider.

Carved representations of yurts were found on funerary furniture inside 6th century Sogdian tombs in Northern China. The Sogdians were an Iranian people that lived and traded along the Silk Road.

In summary, one could say that the oldest known representations of yurts derive from an Iranian nomadic context, ranging from Crimea and the Zagros Mountains in the West to Northern China in the East.

Further reading: David Stronach, On the Antiquity of the Yurt: Evidence from Arjan and Elsewhere

Our yurt (the one in the header photo), standing in the center of the Valle d’Itria in Apulia in Southern Italy, can be booked for a stay during the summer months. Please contact us if you are interested.